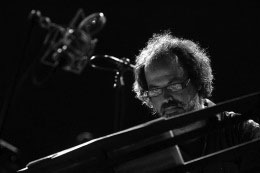 Dirk Luijmes won several prizes at (inter)national organ competitions and gives concerts throughout Europe and the United States. He is a specialist on the harmonium and many new compostions for this instrument were initiated by him. Dirk gave concerts with ensembles like Capella Amsterdam, The RIAS Kammerchor and The Dutch Chamber Choir. He has played in various special productions and played the woldpremiere of the 1919-version of Stravinsky’s Les Noces, which was also held in Paleis Noordeinde. Dirk performed in the Concertgebouw in Amsterdam and the Musikverein in Vienna. He played the American premiere of the First Harmonium Concerto by Martijn Padding in the Carnegie Hall, a piece specialy written for him and the ASKO- Schonberg Ensemble with Reinbert de Leeuw. He is artistic leader of the ”Stichting Longen & Tongen” and writes articles for the Concertgebouw and works for the Dutch radio. Dirk has recorded several CDs, one of which is with the Suite by Froberger, a piece which has been discovered by him. The CD with Padding’s concerto for harmonium received the Edison Klassiek award in 2011.