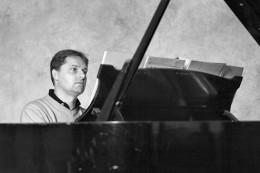 Wim Voogd studied the piano, organ and church music at the Conservatories of Music in The Hague and Rotterdam (piano with Michael Davidson). He attended Lied-masterclasses with Graham Johnson and Irwin Cage. In 1999 he followed an intensive course in Baden (Austria) on the interpretation of German song, studying with Rudolf Jansen and Robert Holl. Wim works as a pianist and piano teacher at the Royal Conservatory of Music in The Hague. He regularly performs chamber music and accompanies vocal and instrumental soloists. Together with soprano Nathalie Mees he forms the Duo Zinger. He plays in the Koetshuistrio with flutist Froukje Wiebenga and viola player Frank Goossens. In addition he works as a choral conductor, organist and continuo player.