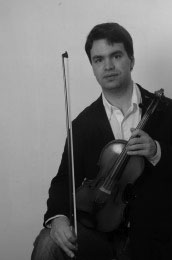 Bob studied at the Amsterdam conservatory with Jan Repko, Davina van Wely and Herman Krebbers. In 2006 he completed his masters with Vesko Eschkenazy. Bob attended masterclasses with Marc Lubotsky, Donald Weilerstein, Shmuel Ashkenazy, Ivry Gitlis en Pierre Amoyal. He won the first prize at the Iordens Viooldagen and at the Prinses Christina Concours. In 2000 Bob qualified for the “Diplôme d’Honneur” at the International Wieniawsky-Lipinsky Competition and in 2005 he was a laureate at the Dutch violin competition Oskar Back. Since the age of ten Bob has played as a soloist with orchestras and has given numerous recitals in important concert halls. He also performed for both radio and television. www.bobvanderent.nl