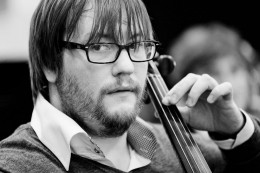 Charles read music at Clare College Cambridge and studied at the Eastman School of Music (Rochester, NY). He held a fellowship at the Guidhall School of Music and Drama (GSMD). Charles has performed in concerts venues all over Europe and North America. He regularly programmes contemporary music and has developed relationships with several composers such as Shu Wang (China) and Nathan Williamson (UK), who has written a new sonata for him. Charles lead seminars on performing and teaching skills at the GSMD and was a cello professor at the Yehudi Menuhin and Purcell Schools in London. He performed with the Royal Philharmonic Orchestra, is the solo cellist of the Insomnio Ensemble for contemporary music (Utrecht) and has also been playing with the Lumaka ensemble. He teaches and gives chamber music masterclasses at the Sweelinck Academy (Amsterdam). Charles plays a 1685 filius Andrea Guarneri cello which hes been lent to him by an anonymous benefactor.