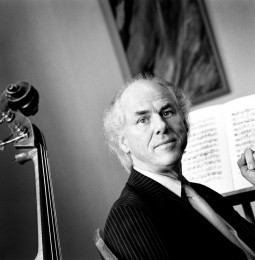 Hans Roelofsen is a pupil of Anthony Woodrow. He graduated Cum Laude at the “Sweelinck-Conservatory” of Amsterdam in 1977 and continued his studies with Anner Bijlsma, obtaining a “Prix d’ Excellence“ in 1979 and was subsequently selected for a scholarship for the Netherlands Music Prize. He combined a part time position as solo bass with further studies with Gary Karr in Hart College of Music Hartford (Connecticut). He became a pioneer of the double-bass to free the instrument from its confinement to the orchestra, using the same approach as would be applied to any other string instrument. Hans shared the solo bass position in the Netherlands Philharmonic Orchestra with Rudolf Senn and has been professor at the Rotterdam Conservatory since 1984 and the ArtEZ Messiaen Academy since 1994. Many of his pupils have become leading players in major orchestras including the Concertgebouw Orchestra or on major teaching positions as professors in Germany.
Hans has performed as a soloist with orchestras in all major concert halls in Europe, The United States and South America. He performed chamber music with Yehudi and Hepzibah Menuhin, Tibor Varga, Vadim Repin, Yuri Bashmet, Menahem Pressler, Maria Jõao Peres, Mûza Rubackyté, Augustin Dumay, Colin Carr, the Prazak -, Skampa-, Fine Arts- Orlando-, Prakanyi-, Leipzig- St.Petersburg- and Vilnius Quartet.
Hans has participated in numerous festivals and workshops and premiered his transcription of two pieces by Chopin and Rachmaninov. He has been advisor and participant in international juries for competitions on the double-bass and is the artistic director of the Tindal Foundation which organizes chamber music concerts. Hans has enlarged the bass-repertory with over a hundred titles.
Hans plays a bass made specially for him and a on bass reconstructed from a 17 century violone, both made by Jaap Bolink. He also plays a copy of a six-string Maggini violone from 1600.