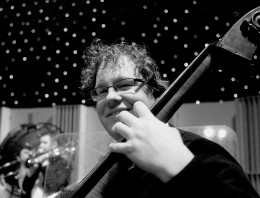 Maarten Storm started to play the cello at the age of 7. Later he switched to the double-bass and got his training firstly with Peter Leerdam at the Conservatory of Rotterdam and he also studie with Jean-Paul Everts and Knut Guettler at the Royal Conservatory of Music in The Hague. He finished his studies in 2008. Maarten followed mastercalsses with Duncan McTier, Bozo Paradzik and Vincent Pasquier. Marten currently works freelance with several orchestras such as the Brabants Orkest, the Gelders Orkest, the Nederlands Philharmonisch and Holland Symfonia. Maarten is an all-round bassplayer, he is the bassist of the Magogo Chamber Orchestra which combines classical music with other perfomring styles in a cross-over manner. He also worked for theatre-productions with Herman van Veen and went on tour through many theaters with Wende Snijders in 2010. Foto: Gildas Delaporte