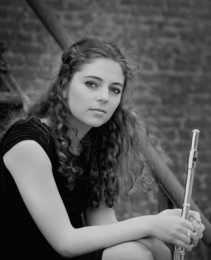 Felicia studied at the Young Talent Class (Conservatory of Utrecht) with Abbbie de Quant, and graduated in 2007. She studied at the Conservatoire National Supérieur de Musique (Paris) with Pierre-Yves Artaud and finished her post graduate studies with Jacques Zoon (Geneva) in 2011. Felicia has attended masterclasses with Patrick Gallois, Philippe Bernold and Emanuelle Pahud. She gained the first prize in the National Flute Competition, the first prize in the competition Netherlands Young Musical Talent and was selected as Young Musical Talent of 2002. She won the first prize of the Princess Christina Competition, which resulted in an appearance at Carnegie Hall. Further prizes include the Jeunesses Musicales flute competition (Bucharest) and the Essent Music Award. As a soloist she has appeared with numerous orchestras, the North Holland Philharmonic Orchestra, Camerata Amsterdam, the Netherlands Chamber Orchestra, Kiev Solists and the Dutch National Youth Orchestra. Felicia also was flutist at the Zürich Opera Academy from 2007 until 2008. Together with pianist Daria van den Bercken she played in the Concertgebouw’s Young Dutch Performers series, and in the Debut Series. In October 2009 Felicia received the Elisabeth Everts prize. www.feliciavandenend.com