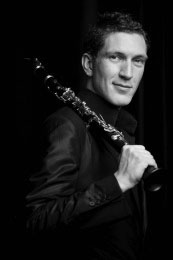 Lars studied the clarinet at the Juilliard School for Music with Charles Neidich. He has won several first prizes such as The International Competition for Youth (Lisbon 1994) and the RTBF Jeunes Solistes (Brussels 1993). He has played in the Amsterdam Concertgebouw, Carnegie Hall (NY), Wigmore Hall (London), Musik Verein (Vienna), the Cité de la Musique (Paris) and the Philharmonie in Berlin. Lars has appeared as soloist with the Rotterdam Philharmonic, the Chamber Orchestra of the Netherlands, the New Ensemble Amsterdam and the Amsterdam Sinfonietta. He performed the world premiere of the Clarinet Concerto Yellow Darkness written for him by Willem Jeths and the piece Euro by Theo Abazis. Lars is a member of the Spectrum Concerts (Berlin). He has performed with various ensembles such as the Skampa Quartet, the Quatuor Danel, the Quatuor Ebène, and the Altenberg Trio Wien. Lars frequently performs in international festivals and is a guest-player with The Academy of St. Martin in the Fields. In 2003 Lars was awarded an “Edison” for his début CD, and also recorded CDs with music by Dohnányi, Harbison, Hindemith, Reger (sonatas) and Brahms (sonatas). Lars is founder and artistic director of the “Dutch Tone Festival” in ‘s-Hertogenbosch and teaches at the Fontys Music Academy Tilburg. www.larzetto.com