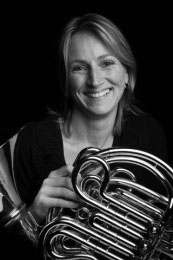 Wendy studied the French horn with Vicente Zarzo at the Sweelick Conservatorium Amsterdam and got her masters degree in 1995. In that same year she was appointed 3rd hornplayer /substitute solo-horn with the Residentie orkest, The Hague. Since 1997 Wendy is 3rd horn / substitute solo-horn player with the Rotterdam Philharmonic Orchestra. She played solo-concerts with the Noord Nederlands Orkest, the Residentie Orkest and the Rotterdam Philharmonic Orchestra. Besides this she plays in several chamber groups such as Domestica Rotterdam.