The repertoire of the Alban Berg Ensemble  consists of:

Compositions from the Second Viennese School and other works from the beginning of the Twentieth Century, which have played a fundamental role in the development of the present performance practise and for that reason are still very much alive today.

New works from contemporary composers. These compositions are programmed in a fascinating combination with the older repertoire in such a way that they are being heard in their historical perspective. 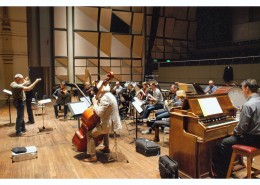 Compositions from earlier times which are of special importance for the contemporary music or constitute an important inspirition for today’s music making. In this way the historical factor of the programming gets its shape and the Alban Berg Ensemble thus gives the contemporary music an additional value by combining it with the arrangements. If necessary, these older works are made suitable for the ensemble by arranging them for the appropriate instrumentation. This working method also originated with the composers of the Second Viennese School. They first performed their music in private circles and in smaller instrumentations, before the works were played for a wider public and the music critics.