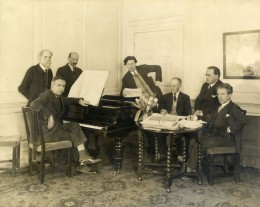 The Stichting Alban Berg Ensemble is a non-profit organization and is a registered charity since July 27th, 2012 under no. 82 943 (RSIN: 813 747 119). It subsequently also acquired the status of Cultural Charity together with the corresponding tax-benefits.

The current service- and tradenames – designating the activities of the Foundation in the Practice of the Perfoming Arts – (e.g. Alban Berg Ensemble; Alban Berg – Ensemble; Alban Berg – Ensemble, Ensemble for Contemporary Music; Stichting Alban Berg Ensemble, etc.) have been designed on January 1st 2006, and have since then been in constant use, while its logos – on official documents, websites, stationary or otherwise –  consist of one of these names together with the signature of Alban Berg (which is public domain since January 1st, 2006). Both names and logos are SM, TM and Copyright © protected. The logo, for example as used in the header of this website, is (click to enlarge):