For its new project the Alban Berg Ensemble will work together with the mezzosoprano Maria Fiselier and the clarinettist Lars Wouters van den Oudenweijer.

Maria Fiselier graduated in 2011 from the Royal Conservatory in The Hague, with a distinction for ‘artistry and integrity in performing’ and will continue for her Master’s degree due in 2013. She will also be a member of the National Opera Studio in London for season 2012/2013.

On the opera stage she performed the role of Dorabella in Mozart’s Cosi Fan Tutte and participated in Franz Lehar’s Die lustige Witwe with Het Gelders Orkest conducted by Martin Sieghart. Most recently she performed the role of Nancy in Britten’s Albert Herring alongside Dame Felicity Lott at Aldeburgh Music. Other appearances include the role of Mercedes in Bizet’s Carmen during a production of the DNO (Dutch Opera) called ‘Singing at DNO’ conducted by Martin Wright. In June 2012 she returned to sing Mercedes during the ‘Festival Classique’ in the Hague with the Hague Philharmonic and conductor Santtu-Matias Rouvali.

In season 12/13, Maria was a finalist at the International Vocalist Competition in Den Bosch. Further engagements include concerts of Alfred Schnittke’s Nagasaki with Het Haags Toonkunstkoor of The Netherlands conducted by Daan Admiraal.

“Wouters handles this temperamental instrument with complete command, and his finger work is nothing short of stunning.” Fanfare Magazine

Dutch clarinetist Lars Wouters van den Oudenweijer (1977) studied at the Juilliard School for Music in New York with clarinetist Charles Neidich on a sponsorship by the Fulbright International Scholarship Program. 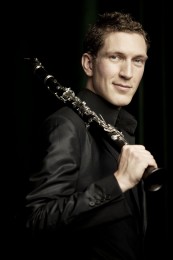 Lars has won several first prizes at international competitions such as the “International Competition for Youth” (Lisbon 1994) and the “RTBF Jeunes Solistes” (Brussels 1993). In 1999 he made his début in the Amsterdam Concertgebouw and performed very successfully as a Rising Star in the so named concert series in 2001-2002. Since then, Lars has played in major venues such as Carnegie Hall New York, Wigmore Hall London, Musik Verein Vienna, Cité de la Musique Paris and Philharmonie Berlin.

He has appeared as a soloist with orchestras such as the Rotterdam Philharmonic, Chamber Orchestra of the Netherlands, New Ensemble Amsterdam and Amsterdam Sinfonietta. He performed the world premiere of the Clarinet Concerto “Yellow Darkness”, written for him by Willem Jeths, in 2005 and the piece “Euro” by Theo Abazis at Carnegie Hall in 2001.

Lars has been a member of Spectrum Concerts Berlin since 2000. He has performed with string quartets and ensembles such as Skampa Quartet, Quatuor Danel, Quatuor Ebène, and Altenberg Trio Wien. Lars performs frequently in the major international festivals with colleagues like Janine Jansen, Inon Barnatan, Amihai Grosz etc. He is also a guest-player with the Academy of St. Martin in the Fields in the UK.

In 2003, Lars was awarded an “Edison” for his début CD. Other CD’s followed, with music by Dohnányi, Harbison and Hindemith. In 2009, Challenge Records released his CD with Reger sonatas, which received outstanding reviews by the international music press. A new CD with Brahms sonatas will be released in March 2011.

Lars founded and is artistic director of the “Dutch Tone Festival” in ‘s-Hertogenbosch. He teaches at the Fontys Music Academy Tilburg.

“His technique is not only of an utterly rare perfection, it also shows finesse and flexibility on every level in a sensational way.” Berliner Mogenpost